Michael Schumacher is the most successful driver in the history of Formula 1. For many years he met famous photographer Michel Comte on his journeys through the paddocks and test tracks of the world.

On the occasion of the 50th birthday of the Formula 1 icon, Keep Fighting Foundation presents the STARBOX, a unique collection of 7 artistic pictures from the world of mobile high technology.

The 7 photos span a quarter of a century and document the various aspects of Formula 1. They are among Michael Schumacher’s selection of his favourite pictures from the internationally renownedphotographer, for whom he allowed greater closeness than in most cases. 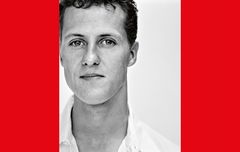 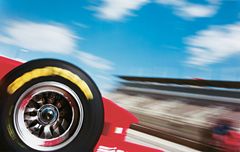 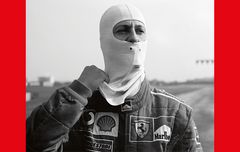 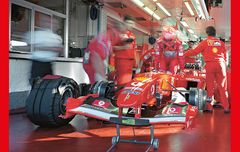 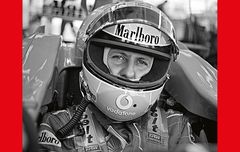 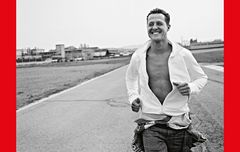 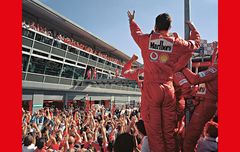 In homage to the unique career of the most successful race car driver of all times, a spectacular series of publications has been published. In two limited special editions internationally renowned photographer Michel Comte celebrates the man whose sporting legacy is likely to remain unequaled for all time.

With seven world championship titles and 91 Grand Prix victories, Michael Schumacher is in his own lifetime the iconic figure in his sport. His records have redefined the history of Formula 1. Even after his retirement, Schumacher has remained the personification of this sport that spans the globe. His name stands for perfection, success, motivation, quality, and team spirit.

Born 1954 in Zurich, Michel Comte is a member of a small, select group of internationally famous photographers. He established a reputation with his portraits of stars from the arts and entertainment scene, with his fashion magazine covers and with his photo reports while working for the International Red Cross. In Formula One, he is equally capable of producing shots in sharp focus as he is abstract, blurred and highly expressive images.

Looking back on this photographic collection, Comte sums up what he has tried to convey as follows: «I met a man who fascinated me, and not just because he was the fastest of them all. I got to know a fantastic team player, a man who injects tremendous energy and dedication into everything he does.» For more than 12 years, he followed Schumacher through his career with a camera and recorded images that convey not only the sheer brute speed of the race track but also the extraordinary intimacy of this private person.

The Golden Edition, designed with gold inside covers, is limited to 500 copies, numbered, and signed personally by Michael Schumacher.

The book includes 450 pages, of which about 400 are artful color and black-and-white photographs. The gilt-edged book comes also with a high-quality, stamped print by Michel Comte and an exclusive hand-made box. The text are by Schumacher’s long-time media consultant and manager, sports journalist Sabine Kehm, and in part by Michael himself. The descriptions are impressively up-close and personal. The book is available in German and Italian, and an English translation can be included at request.

Your purchase will be assigned according to the order.

With the purchase of the STARBOX and the 7 91. GOLDEN EDITION you support the Keep Fighting Foundation.